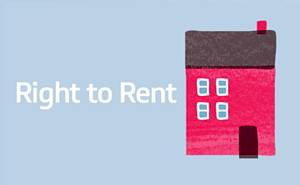 David Cox, managing director of ARLA, warned that agents who have already agreed contracts or agree some over this weekend for tenancies starting on or after Monday will need to be compliant.

He also warned that referencing agents cannot do the legal checks. He said: “All they can do is check the documents are genuine. All identification checks need to be done by the letting agent.

“Also remember it’s not just tenants who need to be checked. It’s all adult occupiers in the property.”

The checks on immigration status can be carried out by landlords or, as long as it is agreed in writing, by agents. If that is the case, letting agents should put a clause in their contracts that they will carry out the Right to Rent checks.

The checks can be made within 28 days before the start of a new tenancy agreement authorising occupation.

Right to Rent responsibilities do not end with checking prospective tenants’ immigration status. There is also a duty to copy documents such as passports, and keep the documents throughout the tenancy and for one year afterwards.

The Right to Rent regime, under the Immigration Act 2014, carries civil penalties of up to £3,000 fines.

However, the new Immigration Bill currently going through the Lords will bring in criminal penalties for landlords or agents.

A number of peers have expressed considerable concern.

Tory Lord Howard of Rising said: “I find it a bit rich that landlords should risk imprisonment for housing an illegal immigrant when it is the Government’s failure in their duty to protect the borders of this country that has resulted in the illegal immigrant being here in the first place.

“I fully understand the difficulties in controlling our borders, which will inevitably lead to errors, but should the person responsible for the error go to prison?

“If those responsible for allowing illegal immigration should not go to jail, why should a landlord?”

He went on: “It is not unreasonable for landlords to play their part in helping with the problem of illegal immigration, but what they are asked to do should be reasonable and proportionate.

“Landlords being subject to imprisonment for something over which, in practical terms, they can have little or no control is not reasonable.

“I point out that the people most affected by this will be that huge army of very small landlords who do not have agents to act for them.”

Another Tory, Lord Deben – formerly John Gummer – said: “There is a fundamental concern about this legislation.”

He called for a delay to Monday’s national introduction of Right to Rent, saying that there needed be a pilot scheme, independently evaluated and “shown to have a real effect on illegal immigration”.